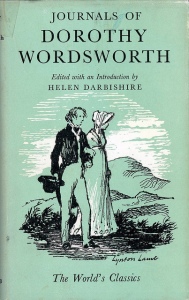 I dawdled at Orca Books for a while on Friday before meeting a friend for lunch and, on a whim, I bought a slightly battered little book, Journals of Dorothy Wordsworth. A stamp and handwritten note on the flyleaf revealed it had been purchased at Dove Cottage, Grasmere in 1970. At the time, it cost 45 p. I am enchanted  by it, and inspired. The first few pages of Helen Darbishire‘s engaging introduction, written in 1958, have me in tears. What better source for learning how to describe; describe nature, the natural world, and landscape but also people. She could sketch a character or a first impression indelibly in only a few lines. I bought the book without much investigation because it was cheap and because these early journals are close in date to the period I’m writing about — 1798 and 1800 to 1802. Isn’t it lovely to indulge in an inexpensive little whim and have that whim so well-rewarded? Dorothy did not want to be an author. She did not see herself as a poet. As Miss Darbishire wrote, she was a poet in prose:

There is something . . . that imagination does, the simplest thing, the central thing. It pierces through the familiar surface to something nearer to life itself than what we ordinarily see.

There is only one known portrait of Dorothy, a sad one made when she was quite old, and yet she lives. Not only through her own vibrant words, but in her brother William’s poetry — some of which is clearly sourced from her journals — and in Coleridge’s, too. And from the tender regard both men had for her. “[H]is exquisite sister,” Coleridge wrote, and you have to credit his perspicaciousness: “[H]her person is such that if you expected to see a pretty woman, you would think her ordinary; if you expected to see an ordinary woman, you would think her pretty!”

William Wordsworth was speaking more generally in the following quotation, but these journals are so beautiful, so captivating, that he could easily have been writing of Dorothy:

Of genius in the fine Arts the only infallible sign is the widening the sphere of human sensibility for the delight, honour, and benefit of human nature.

She was a great walker, along with her brother and Coleridge. In 1818, when she would have been about 46, she climbed Scafell Pike (the highest mountain in England at just over 3,200 feet) with another lady, a maid, and a pair of local guides. She never married. She fell ill from about 1829 and eventually her mind grew frail as well.

As ever, all we have is now.