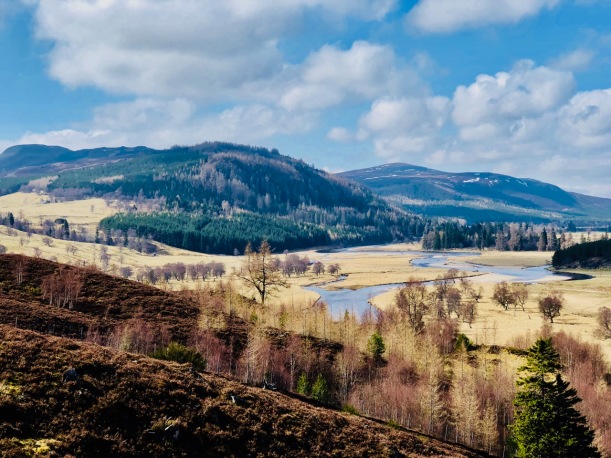 From York, we were soon back on the train, this time for a brief stay in Edinburgh before an overnight trip out to Deeside. We were driven around by Your Tour Scotland (thanks very much, Don), so we were able to visit spots both on and off the beaten track, including on Day One a ruined abbey at Balmerino and another spectacular ruin, Dunnottar Castle (say duh-NOT-are) on the North Sea. Dunnottar is dramatic and windblown, so we followed our visit there right up with a warming lunch at the Marine Hotel in Stonehaven. Have you ever heard of salmon skink? I Here’s a recipe I found for salmon cullen skink, which is the same idea. Cullen skink is ubiquitous in Scotland, more or less a chowder made with cod. The Marine Hotel serves salmon skink in a bread bowl. Definitely one of the best meals I had on this whole trip!

Our post-lunch stops included romantic and mysterious Burn O’Vat and a ruined medieval church and churchyard, which was used until much later, at Tullich. We ended the day in Ballater, a lovely town with the River Dee running through it, overlooked by the Cairngorm Mountains.

Yes, it had been a bit cold and occasionally wet up to this point, but overnight the weather shifted and the morning brought both sunshine and warmer air. Yay! The scenery was beautifully on view for our Day Two drive along the river and visits to Crathie Kirk and churchyard near Balmoral (though not the castle), the villages of Balmoral and Braemar (home of the Highland Games, and the lovely, lyrically-named Linn O’Dee.

In more detail, the British royal family worships at Crathie Kirk when they are at their Scottish home, Balmoral Castle. One interesting person buried in this churchyard is John Brown, Queen Victoria’s faithful Scottish attendant brought to boisterous and rough-hewn life by Billy Connolly in the film Mrs. Brown, with Judi Dench as the queen.

Apparently, Queen Victoria herself was fond of the Linn O’Dee. Easy to see why, since the river flows rapidly through a picturesque rocky gorge at this point. In Scotland, a linn is exactly that —  where a watercourse has cut through a shelf of hard rock creating a narrow steep-sided cut through which the watercourse runs.

Braemar is another one of those appealing, higher-elevation towns with mountain air and a river (the Dee) running through it. We were not there long, but it was fun to note a tongue-in-cheek sign in the local butcher shop:

For more about haggis, click here. It does actually taste better than it sounds.

We arrived back in Edinburgh looking forward to a couple of  free days before our Best of Tour Scotland was due to start. We spent our first day in the city walking through Princes Street Gardens and exploring the Royal Mile. One of the very photogenic places on my to-see list was the Writer’s Museum just off the Royal Mile. The museum honors three great Scottish writers, Robert Burns, Sir Walter Scott, and Robert Louis Stevenson.

Shopping was also involved in getting to know Edinburgh, since Scotland features loads of tempting cashmere and wool items such as shawls, scarves, hats, and gloves. And I never stop looking at books. I often take photos of those that intrigue me because I know I can’t carry them home. I did buy a crime novel set in the Highlands, though — His Bloody Project by Graeme Macrae Burnet. I’m well into it now and it’s pretty bloody entertaining so far, too. 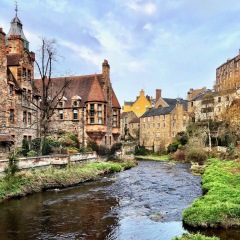 The next day we found time for an outing to Rosslyn Chapel, now widely known because it features in the ending of The Da Vinci Code, but nevertheless an important and unusual structure in its own right, and in the ownership of a single family since 1446. We had fun traveling to the village of Roslin and back by public bus, which allowed us to see more of the city as well as suburbs and countryside. In the evening, we took in another photo op in a stroll through Dean Village, finishing in time to meet up with our tour.

More about that in Part 3!