Yes, there are more literary adventures available than you might think down here in the state capital, which is after all a college town times three. Here’s what I’ve been able to take advantage of lately and I’m feeling SO fortunate. 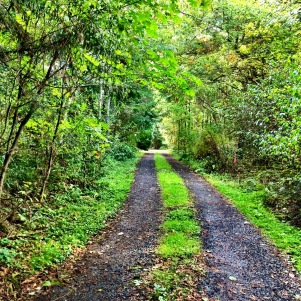 At the end of September, I took up a week-long writing residency at Holly House, which is a retreat center for women “of all creative talents” on Arcadia Point in Mason County. Holly House is maintained by a small jewel of an organization, Hypatia-in-the-Woods. The cottage is a 40-minute drive from my house, but a whole world away. This is a solo operation and nature, nurture, beauty, and peace abound. I wrote, slept, read, walked and came home renewed and full of gratitude for the opportunity.

A few days later, Jess Walter, author of  Beautiful Ruins and some kick-ass short stories, spoke at Saint Martins University in Lacey. An SRO crowd filled the hall and Jess’s long-time friend Jim Lynch introduced him with love and laughter. I continue to be delighted that writers like Jess are showing up — right in my neighborhood! — to charm and inspire readers and writers. One of his messages to writers, echoed by Liz Gilbert (more on her shortly) is that you don’t necessarily need an MFA to be “A Writer” and that starting a writing career with $30,000 in debt is probably not a great idea. This is the second annual talk in SMU’s Les Bailey Writers Series and last year’s speaker Brian Doyle was also terrific.

It’s not a literary event per se, but whether it’s Spring or Fall, Olympia Arts Walk is an unmissable Olympia cultural phenomenon, so I didn’t miss it. There is always plenty of energy, lots to look at, and you are bound to run into someone (or many someones) you know.

Although Seattle is a little beyond local, I did head on up to the big city to see Elizabeth Gilbert in person last week. Her new book Big Magic has so many terrific things to say about creativity and living a big life. I’ve been listening to her practical and encouraging Magic Lessons podcasts for several weeks and got my hands on the book as soon as I got back from Holly House. God love her, she is OUT THERE on a few things but that’s kind of the point. She puts herself out there in a way that convinces you she’s fully alive and that she wants you to take every opportunity to be the same. My goodness, can that woman communicate — novels, podcasts, talks, photos, and her one-of-a-kind, worth-joining-for Facebook page.

The very next night, there was another cool local event, a book signing for my friend Russ Cahill’s novel of ancient Hawaii, Kolea. I never did get to talk to Russ because friends, friends-of-friends, and new fans were all lined up to get books signed. Now he’s off on a research trip to Yosemite for his next book, living the writing life.

Then the following evening (this is three nights in a row, folks), Timberland Regional Library (one of the best regional library systems imaginable) launched its new anthology, Timberland Writes Together, which builds on the success of its program Timberland Reads Together. No, I’m not one of the 15 writers included, but my friend Meagan’s story “Going Without” is in there. You can download or borrow the anthology from the library (of course), or buy it online, and discussions and panels centered on this project are scheduled in Thurston, Mason, Pacific, Grays Harbor, and Lewis Counties. I’m so impressed that TRL has taken this project on and fascinated to learn how much writing has been going on around here. Even more than I had suspected!

According to my calendar, more bookish adventures are waiting. But let’s not get ahead of ourselves. I got this post written and now it’s back to the WIP.