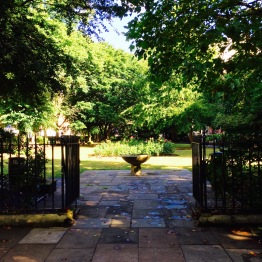 Just as I returned home toward the end of July, BBC2 began broadcasting Life in Squares, about the Bloomsbury Set — Virginia Woolf, Vanessa Bell and all that — of whom it was said they “lived in squares, painted in circles, and loved in triangles.” Very amusing, I’m sure.  That particular set is gone but Bloomsbury is still known for its garden squares, literary associations, and its cultural, educational and health-care institutions. Over the years I’ve stayed in quite a few different areas of London — Swiss Cottage, Ebury Street, Bayswater, Earls Court, Sloane Square and several hotels in Bloomsbury, to which I keep returning.  By way of contrast, last fall I stayed in a lovely hotel in Sloane Square but didn’t really enjoy the area — too upscale for me, I suppose. Bloomsbury (click for a walking tour) is comfortable, vibrant, multicultural, and wears its academic connections like a pair of old slippers. It’s slightly scruffy in places, but who cares? If I am within a stone’s throw of Russell Square and the British Museum, with the British Library not too far away, I feel perfectly at home.

If you travel in from Heathrow on the Piccadilly Line, you alight at Russell Square Tube station. Follow the Way Out signs, climb a short flight of stairs with your suitcase, wait impatiently for the cattle-car style lift, pop your Oyster card on the reader, walk across Bernard Street to Marchmont Street and there you are. For starters, have you seen the movie Pride? It follows events that actually occurred during the 1984 miners strike, when a group of gay and lesbian activists provided dedicated, direct support to some Welsh miners and their families. The two groups ended up making a deep and long lasting connection that is recounted in the film with humor, sensitivity, outrage, and yes, pride.  The first time I saw it, I immediately recognized  Gay’s the Word on Marchmont Street, a Bloomsbury bookstore that was a sort of headquarters for Lesbians and Gays Support the Miners.  It’s still there, a little bit of modern history where you can wander in and browse, or buy a T shirt. Anyway, the film deserves to be better known and more seen and I recommend it whole-heartedly. Also on Marchmont, there is a terrific place for breakfast at No. 49, helpfully named the 49 Cafe (lovely food, lovely staff), and Judd Books, which specializes in second-hand academic books and carries much else besides. North Sea Fish Restaurant and Takeaway (deservedly highly rated for fish and chips) is around the corner on Leigh Street. And Brunswick Centre, a shopping complex adjacent to the Tube station, will have everything you could possibly need and quite a few things you don’t.

There is a nice cafe, with outdoor seating, in the north corner of Russell Square, and one of only 13 remaining cabman’s shelters is on the west corner. When the weather is mild, I love to sit on bench or at the cafe with a book or notebook, people watch, and read or write, and day dream.

I’ve only skimmed the surface of what Bloomsbury has to offer. If you have a favorite London neighborhood, I’d love to hear about it in the comments!